If there’s one network that truly gets Christmas, it’s UP. The inspiring channel embraces the kind of uplifting programing that the whole family can enjoy. This Sunday, December 11 at 7 p.m. EST, it’s the premiere of a warm and genuinely funny romantic comedy that just crackles with life and heart. “Season’s Greetings” stars the multi-talented sparkle of pure delight, Laura Bell Bundy. Laura plays Darcy Blake, America’s most beloved greeting card writer. When the handsome new owner steers the company in a direction that threatens to compromise the outspoken Darcy’s ideals, that’s when the fun (and the romance) begins!

“I would consider this one of my favorite projects that I’ve worked on,” Laura expressed. “Not just for Christmas related things, this is one of my most favorite projects that I’ve ever done. It’s because I love the character so much and I felt so connected with her. The comedy felt so real and effortless and unforced. And the other actors that I had the privilege of working with were all so perfectly cast. They were also such great people — we had just as much fun off the set as we had on the set. The whole vibe of this movie, from the director to the camera crew to the makeup team, was just really great!” 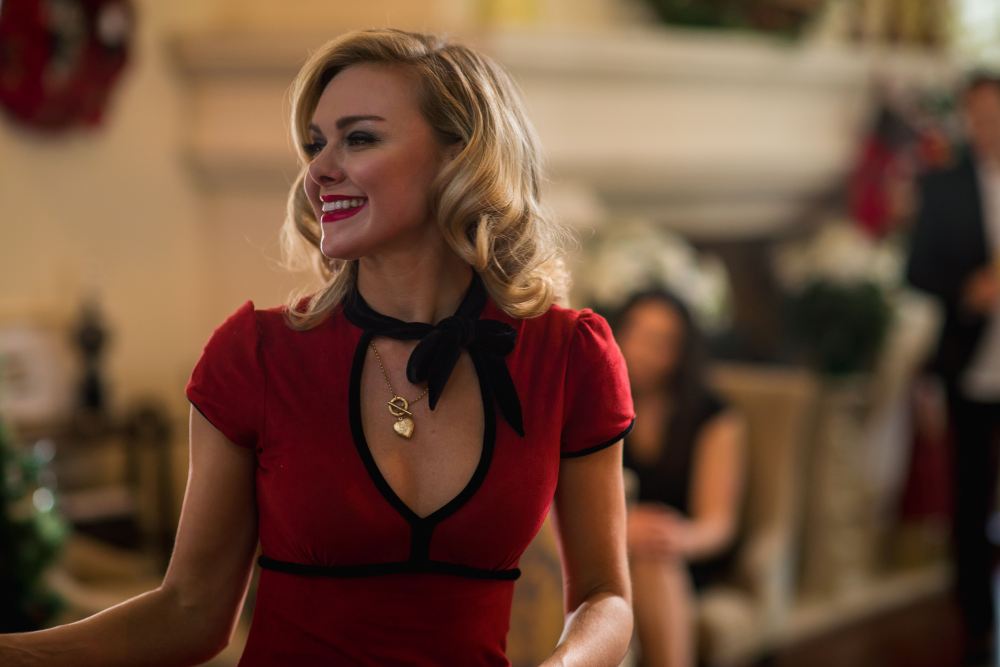 “Season’s Greetings” was filmed in just 12 days. Laura told Entertaining Options how she never even spent time in her trailer because everyone was so energized and excited about working on this project.

“Everyone was firing on all cylinders!” she enthused. “Everyone in the supporting cast was hilarious, any one of them could have had their own movie because that’s the kind of ability we are talking about. Our director [Allan Harmon] handpicked them because he had worked with them before, so he already had a rapport with everyone and he knew what they were capable of. He told us, ‘Okay guys, I’d like for you to mostly stick to the script, but I’m going to allow you to have one take where you get to improvise.’ There were so many ad libbed moments, times when we were just goofing off and it made it really fun.”

“Plus, we had a camera crew that we could make laugh,” she continued, still sounding very charged about the whole experience. “When you’re doing a comedy and you have a camera crew that is trying not to laugh behind the camera, you’re thinking, ‘Oh yeah, I can get them this time!’ So you really deliver. And, when they’re not responding, you realize, ‘Okay, maybe this isn’t working.'”

The film is a non-stop joyous dash through the holidays. Darcy, fueled by Laura, is a beautiful force of nature, whirling through life, brightening the hearts of everyone she meets. But often, as with most of us, she trips up in mid twirl and it becomes rather embarrassing and uncomfortable.

“She is funny and klutzy! I personally love all the awkward, embarrassing moments that Darcy got into. I didn’t know this in the beginning, but the second the producer got the script and saw what the character was like, he said, ‘Oh, I know someone who has been in embarrassing moments!'” Laura laughed. “He thought of me and it was a perfect fit.”

The company that Darcy works for is called Harrington House. Because of her passionate writing, she is considered the “heart of Harrington.” Interestingly enough, the word heart and Laura seem to be inseparable. Besides the obvious way she can affect a viewers heart, it’s a theme that runs through her work since her very first audition when she sang, “You Gotta Have Heart.” And there was also the unforgettable Shelby Sinclair from The CW’s Southern delight, “Hart of Dixie.”

“Shelby was a true character,” she laughed. “I created her mostly based on my mother, but still she was a character. Darcy is much more true to who I am. She has moments that are like ‘Curb Your Enthusiasm,’ but she is also always that person who is fighting for the heart of things, the person who is outspoken, the person puts her foot in her mouth and embarrasses herself. And that is very true to who I am.”

Beneath the comedy, the movie lightly touches upon other topics, elements that add a little something extra to the story. For instance, one of the main sources of conflict between Darcy Blake and Will Harrington, the new boss (played by Casey Manderson), is his belief that people no longer have the attention span for even a “Top 5” list. It’s more like a “Top 2.”

When asked where she stands on the topic in real life, Laura replied, “Depth is always more important to me. Give me a good solid book! Social media can be a great means of expression, but if you think that we are truly going to connect with each other with a one hundred forty character tweet? That isn’t being realistic. Any problem in life requires sitting down at a table and having a conversation. I hope as a generation — I am the last year of a millennial — that we can be effective with our words. Maybe we think we are being effective because were being more concise? But to really be able to have face-to-face communication or even just a telephone conversation like this, that’s what’s important.” 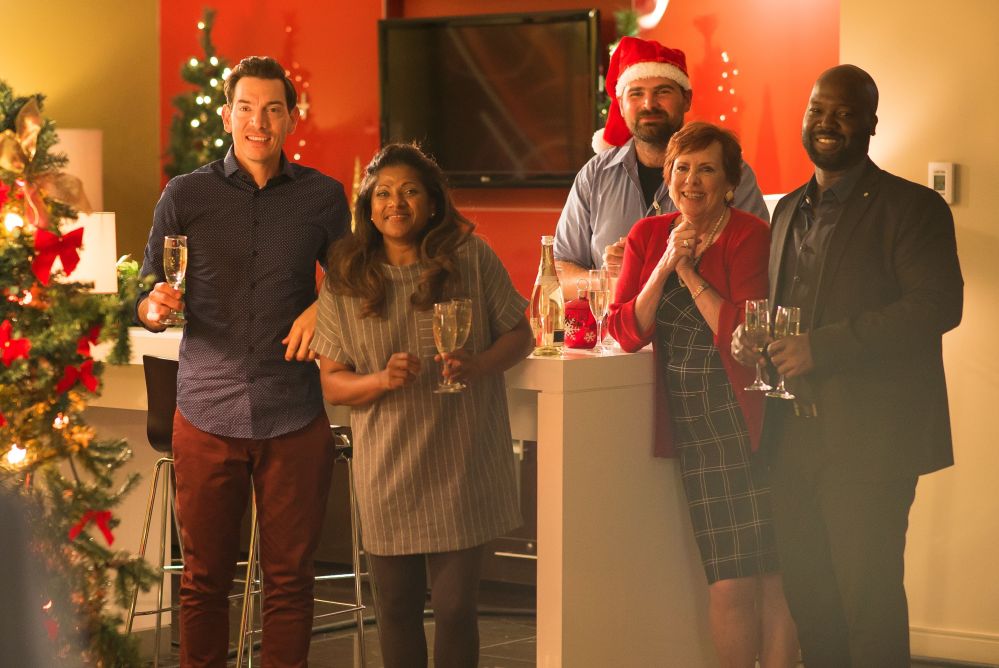 “Season’s Greetings” is a romantic comedy with that special kind of big energy and heart that makes it a holiday movie that will become an annual viewing tradition. It stars Laura Bell Bundy and features an amazing supporting cast that includes the aforementioned Casey Manderson, Matty Finochio as Charlie, Viv Leacock as Bryan, Carrie Genzel as Taylor Armstrong, Linda Darlow as Lillian, Gary Hetherington as Edward Harrington, and Kalyn Miles as Joy — think a combination of Mindy Kaling and Wanda Sykes! It premieres on UPtv this Sunday, December 11 at 7 p.m. EST. The film is highly recommended for it’s warmth, genuine humor, infectious energy, and unexpected twists and subtleties that add a wonderful charm to the film.