Olivia is the bright, rising star who plays Duke, the youngest (and sweetest) of three markedly different daughters on FX’s Peabody-winning hit comedy series Better Things. Max, her emotionally volatile older sister, is perfectly played by Mikey Madison while Frankie, the middle child, who has a fondness for swear words, is brought to a complex, multi-dimensional life thanks to the absorbing work of Hannah Alligood. Pamela Adlon delivers a sublime performance as the matriarch, Sam Fox, a single mother who is also a working actress. The series is uncomfortably real. It boldly dives headlong into sensitive subject matter and relishes in the awkward moments that arise. However, the reward for riding shotgun with this incredible family is nothing short of exhilarating.

As a testament to the show’s impact, it has already been renewed for Season 3.

When Olivia found out about the role, she sent an audition tape over to the casting director. That tape revealed something exceptional enough to earn Olivia a coveted callback… where she got to meet Pamela Adlon!

“I was so excited,” she recalled, her voice still bubbling with joy. “She was just really fun in the callback. I told my mom right after that I really liked her. I mean, I really, really liked her! At that point, it was between me and I believe two other girls. About five days later, I was in my room and I was eating mac and cheese when my mom brought me the phone and said that Pamela wanted to talk to me. I said, ‘Hello?’ She asked me, ‘Will you play Duke on Better Things?’ I was like, ‘Yes, yes, yes, yes, yes, yes, yes!’ It was one of the most amazing moments of my entire life!”

After the initial thrill of getting the role, the experience only got better. Olivia, Mikey, Hannah, and Pamela quickly forged a special bond that made it feel like they were all part of a second family. That relationship translated to the screen in a powerful way and provided the affecting underlying warmth that has made Better Things such a success.

“I’ve actually learned a few things about myself from being Duke,” Olivia told Entertaining Options. “I’ve learned that just being the youngest doesn’t mean that you always get all the attention! You may want all the attention, but you have to learn that sometimes you’re just not going to get it. And when you do get it… cherish it!”

“Duke also pays attention to how her sisters treat her and how her sisters treat her mom. They can be good, but it seems that either Frankie is calling Duke a bad name, Max is saying she’s a crybaby, or both sisters are yelling at Sam for… I don’t know, for forgetting to find Frankie’s socks or not letting Max’s boyfriend sleep over. It isn’t real, but I am so relieved when I hear the word ‘cut’ because it means we can go back to being friends or we can all go to lunch together and talk and have fun.”

Olivia admitted that sometimes she can get a little lost in the moment and feel the emotion she is portraying for real. In an episode called “Eulogy” (Season 2, Episode 6), Max changes the channel when her mom appears on TV. Sam’s best friend, Rich (Diedrich Bader), tries to comfort Sam by saying, “They’ll love you when you’re dead.” Inspired, Sam decides the girls should pay their respects to her while she’s still alive so she can hear the kind words for herself. She includes Duke in the funeral, as well.

“In the scene, they were eulogizing Sam and they were all crying,” Olivia recalled. “I mean, they were really sad. I was crying too, but I was trying to save it up for when Duke sits up and says, ‘Nobody said anything about me! I’m lying here dead and nobody cares!’ It was so sad and so emotional that I couldn’t help but cry a little bit for real.”

On the opposite end of the emotional spectrum, Olivia shared one of the funniest moments on set.

“There was this scene when the fire alarms are all going off and everyone is freaking out and Duke runs downstairs and says, ‘Mama, I’m scared!’ Then she jumps up on Sam and gives her a hug. By the end of the scene, everyone is screaming at each other and Sam yells, ‘Everybody stop!’ She puts her arms out and Duke is still hanging on, hugging her. On one of the takes, when she yells, ‘Everybody stop!’ a painting falls off the wall and everyone started laughing. We made jokes about that take for the entire rest of the season. I still think we should have included the painting falling off the wall in that scene. It was very funny!”

In a “First Look” video, Pamela talks about her television family, saying, “The notion of a broken family is just an anachronism because a family is what you make it. They’ll rip each other apart, but at the end of the day, there’s really no place that all of them would rather be than with each other. And they would chose each other over anything else.”

The intense, angsty series is packed with a number of emotionally charged moments. One of the most poignant episodes is “White Rock” (Season 2, Episode 9). In this episode, Sam and the girls sneak away from life and Sam’s mother, Phil (Celia Imrie), for a quick, life affirming visit with her uncle Lester (Nigel Havers) and his wife Jarita (Jane Carr) to White Rock, British Columbia. The episode is filled with emotional gut punches and unexpected bonding as well as a scene where Duke approaches a lonely woman whom she believes is a ghost.

“That was my favorite scene and my favorite episode,” Olivia revealed. “Duke is finally confronting the Sad Lady on the beach and she gives an entire speech saying that she’s not sure if the lady is real or not, but she hopes that she’s okay and she’s not scared of her anymore — even though Duke’s kind of lying about not being scared of her. She gives her some flowers and says, ‘Thanks.’ Then she leaves. That was one of the most amazing scenes I have ever filmed because of all the emotion that was going around. No one wanted to leave Canada and I never wanted that scene to end because it was just so amazing.”

Throughout the scene, you can see a variety of complex emotions rippling through Duke. There’s a beautiful exchange that is intensified by a wonderful, uplifting emotional arc. Watching her play Duke, it’s obvious that Olivia has incredible acting skills. In fact, before Better Things, she appeared in The Mysteries of Laura, Unbreakable Kimmy Schmidt, and Crazy Ex-Girlfriend. And she’s only ten years old.

“I always really wanted to act and I always imagined how awesome it would be to act. Even when I was little. I’d be walking around my house pretending that I was in a movie,” she laughed. “I would try to get my mom to play in the movie, too.” 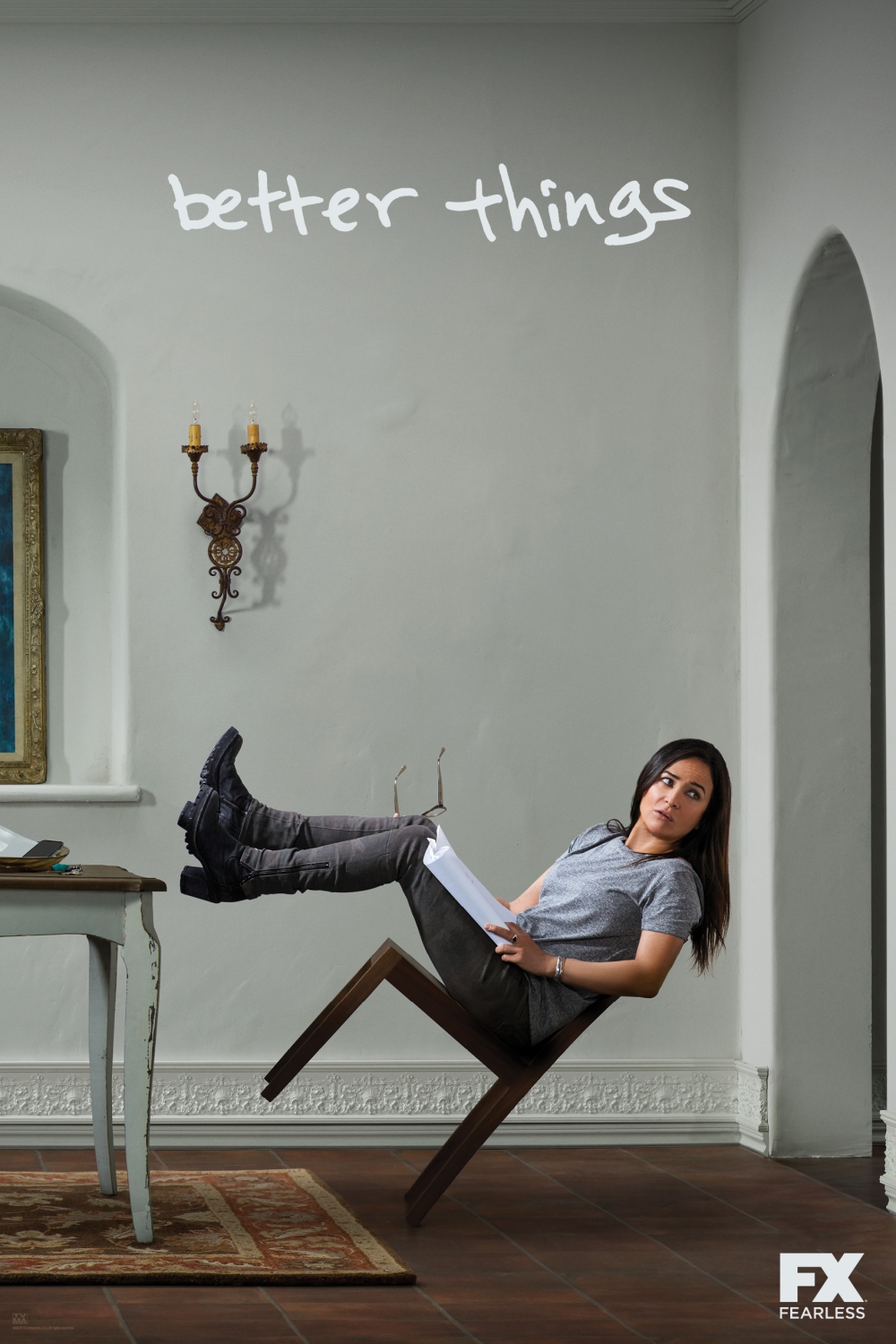 Since, Olivia has already proven herself an accomplished actor, Entertaining Options wondered how she would fare in another career. “If you were the writer, what would you have happen in Season 3?”

“Hmm, in Season 1, you’re introduced to the characters. In Season 2, we’re diving more into the characters’ stories and what they do,” Olivia considered. “If I was writing Season 3, maybe Sam would be starting to realize that everyone is growing up, especially Duke! She’d see that Frankie is growing up because Frankie is trying to deal with herself and what she’s thinking all the time. She’d see that Max is trying to figure out what she wants to do with her life, what college she wants to go to, and what she wants to be. And Duke? I think the thing that Sam is going to have to realize is Duke might not be a baby anymore.”

One last question, just for fun: “Cake or cupcakes?”

“I’m going to have to go with cake because with a cupcake, you get what you get, but with cake, you can take either a big slice or a small slice. You can decide how much you want.”

While waiting for Season 3, catch up on Seasons 1 and 2 on Hulu, iTunes, YouTube, or GooglePlay.