“He was a visionary. He discovered music from artists such as Chuck Berry, Little Richard, and Screamin’ Jay Hawkins during a time when the country was not playing music of that sort. He made those classic rock and roll stars famous. He played that music on ‘white’ radio stations, so to speak, for the first time. And, he had concerts and shows for audiences of all colors to come together to celebrate this amazing music. It really triggered the Civil Rights Movement and it really changed the world.”

Rose Caiola is a four-time Tony Award-winning producer (Dear Evan Hansen, All The Way, The Color Purple, Who’s Afraid of Virginia Woolf?). Earlier this week, Rose was talking to a crowd of writers, which ranged from bloggers to ABC cameramen, about her new production, Rock and Roll Man: The Alan Freed Story. The new musical chronicles Freed’s triumphant struggle to get what he dubbed “rock and roll” played on the radio. The story features a cornucopia of both new songs and timeless hits such as “Sh-Boom,” “Good Golly Miss Molly,” “Ain’t that a Shame,” “Rock and Roll is Here to Stay,” “Great Balls of Fire,” and “Peggy Sue.” The world premiere run will be at New Hope’s esteemed Buck’s County Playhouse from September 12 through October 1.

“He saw white kids dancing with African-American kids at a time when that just wasn’t happening in the broader society,” Broadway’s Alan Campbell added. “He instinctively knew that that was an important moment, it was the music that was bridging the divide in society.”

Campbell plays Freed in this joyous production. His Broadway credits include, Mamma Mia, Sunset Boulevard, and the Tony Award winning Contact. Additionally, Alan has worked Off-Broadway as well as in television and film.

“Sometimes he had blinders on to his own failings as a human being,” Campbell elaborated. “He’s a very flawed character and that’s what makes him so interesting to me as an actor.”

Rose noted “A lot of people have heard about the payola scandal… and it was true. In fact, there was a witch-hunt to take Allen Freed down by means of the payola scandal. There were other DJs at the time, for example Dick Clark, who were involved in payola, but Alan was really the target.”

“I wanted to be the nice J. Edgar Hoover,” George Wendt interjected, “but it’s not happening.”

The beloved Wendt is playing J. Edgar Hoover in Rock and Roll Man. Before his eleven-year run as Norm Peterson on Cheers, the famed actor/comedian was part of Chicago’s The Second City comedy troupe. He also has numerous SNL appearances under his belt and recently starred in the Broadway revival of Hairspray.

When asked what challenges he faced in preparing for this role, Wendt dryly declared, “Singing in a world premiere musical.”

George went on to remark that he recently asked Gary Kupper, musical supervisor/arranger for Rock and Roll Man: The Alan Freed Story, if there was anyway he could take 30 years of technique and squeeze that into about 48 hours of training. 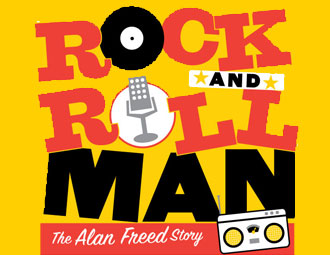 Besides all the great music of that era, the show includes an original score that was written by Gary. Kupper also helped Rose with the writing. However, Rock and Roll Man: The Alan Freed Story isn’t the pair’s first collaboration. Previously, they created an Off-Broadway hit with Freckleface Strawberry, an adaptation of Julianne Moore’s New York Times best-selling children’s book.

“I also have another co-author, Larry Marshak,” Rose informed.

Marshak was a staff writer and editor at Night Beat and Rock Magazine. He also produced an impressive array of concerts and shows which include Love Potion #10 — the longest running show in Vegas history — Forever Motown and Elvis: The Legend Lives! Additionally, he was the manager of The Drifters for 40 years.

Fun Fact: Larry’s first published piece as a writer was an interview with Alan Freed in the Village Voice.

The original structure for the Buck’s County Playhouse was built in 1790 by Benjamin Parry after a fire had destroyed what had previously been called the Hope Mills. Rising like the fabled Phoenix, the New Hope Mills served as a powerful catalyst prompting the village of Coryell’s Ferry to change its name to New Hope. The theater opened on July 1, 1939 and quickly became known as “America’s Most Famous Summer Theater.” Productions featured a cavalcade of stars including such legends as Liza Minnelli, John Lithgow, Grace Kelly, George C. Scott, Walter Matthau, Angela Lansbury, Jack Klugman, Zero Mostel, Dick Van Dyke, Robert Redford, Bernadette Peters, Rob Reiner, and countless others.

After a somewhat tumultuous period that necessitated a closing in 2010, the Bucks County Playhouse was once again reborn. This time it was as a nonprofit 501(c)3 organization committed to providing the finest in theatrical entertainment for visitors and residents of New Hope and the Bucks County area.

Producing Director Alex Fraser addressed the assembled news media, “We are just tickled pink to be presenting a brand new musical, a world premiere, Rock and Roll Man, the story of Alan Freed. It is the biggest show that we have ever done in our history … Doing new work is probably the most exciting thing a theater can do, and being able to attract the kind of talent that we have here is just a huge huge thrill for us! The playhouse is undergoing a lot of changes. As you can see, we’ve got construction going on in the parking lot with the redevelopment of the Playhouse Inn next-door, and we are actually putting in a 4000 square-foot new café on the back of the building that’s been paid for by the Bridge Street Foundation.”

Additionally, the venue will feature a trolley system that will be instituted on Tuesday, September 12, to coincide with the first preview of Rock and Roll Man: The Alan Freed Story.

In conclusion, Alan Campbell expressed that Rock and Roll Man is about a real person, and the musical combines real characters from history with a joyful score. “It’s a lot of different music rolled successfully into one. It’s a jukebox musical and it’s a book musical with all those elements well woven into two hours of entertainment.”

Rose added, “Alan Freed was just passionate about this music, he was going to play it, and there was nothing that was going to stop him from doing that!”

George summarized that Rock and Roll Man: The Alan Freed Story is pure entertainment with “awesome music, awesome dancing, and an awesome story.”

To whet your appetite for this upcoming world premiere, please enjoy a little snippet of “Good Rockin’ Tonight” from an incredible quartet comprised of Jerome Jackson, Early Clover, AJ Davis, and Dr. Eric B. Turner who are backed by Musical Director Dave Keyes.