Laci Kay Somers has over 8 million followers on Instagram. To put that into perspective, on May 2, 2017, the Los Angeles Times ran an article proclaiming a new milestone for the city’s population: 4 million. The story delineated the nearly 70 year journey it took to amass that respectable number. Not only is Laci’s Instagram following more than double the population of Los Angeles, but she was able to reach that number within just a few years.

“It’s a lot more work than people think,” Laci told Entertaining Options. “It’s such a long process of building your name and your brand and earning a good reputation to create a fanbase. People think you just take pictures and then post those pictures, but there’s so much more to it than just that. You have to create a posting schedule and create new content every single day, not just for Instagram, but for all of your platforms.”

Laci is an influencer, an individual who inspires others in a very profound and powerful way. She posts an endless stream of stunningly beautiful photos that, while risqué, are always classy. Think physically fit, athletically toned Victoria’s Secret model. She is also blessed with a fun-loving, embracing personality. If you run into her on the street, not only will she be thrilled to meet you, but there’s a good chance you’ll wind up on her Snapchat.

“It happened just the other day,” Laci recounted. “I met a guy from Norway. I was eating dinner and he came up to me and said, ‘I’m sorry for interrupting, are you Laci Kay? Can my friend and I take a picture?’ I was totally a mess, but I said, ‘Sure!’ It’s fun for me and they were here all the way from Norway, what was I going to do, tell them no? I don’t care where I’m at or what I’m doing, not only is it my duty to give back, but I love doing it.”

It’s important to note, the reason why Laci makes such a lasting impression on people isn’t solely due to her look — “the over-the-top blonde hair with the body,” as she describes. Certainly, that’s what initially captures and captivates, but it’s only her packaging. A gift can entice you because it’s so perfectly wrapped, but once you open it, if you don’t like or need what’s inside, you’re not going to keep it.

In a recent post, Laci stated, “The key to consistent success is staying in your lane and not worrying about what’s going on outside of it. Understanding that your life is only going to be as great as you want to make it, is a huge part of how far you’re ultimately gonna go.” That’s where her magic is. That’s how Laci connects. That’s why her fans and followers are so devoted. She’s real, and as her t-shirts declare, “Real Recognizes Real.” 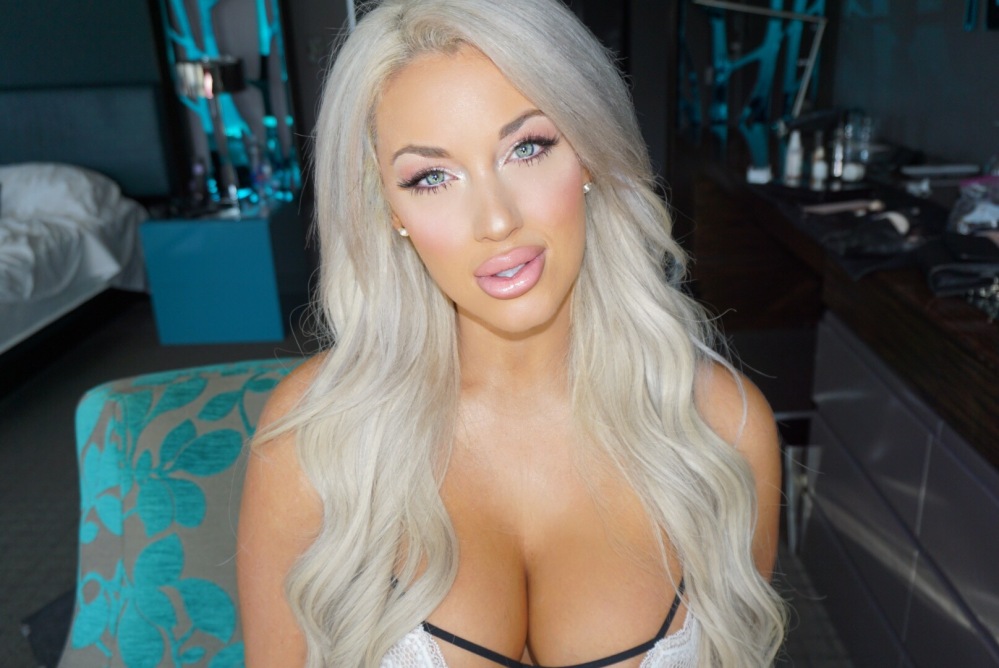 “I’m not just a girl with big boobs and fake blonde hair,” she told Entertaining Options. “I may look this way, but it’s not what I am. I don’t smoke, I don’t drink, and I don’t party. I’ve always been business-minded. Some of the girls I grew up with went down a different path because they followed the money, they followed the celebrity. I followed my brand. It was about making connections, not partying.”

“I like meeting new people,” she continued. “I love engaging with my fans and letting them know I love being involved in their life. And, I love when they’re involved in my life, too.”

Laci began her career when she was just 15. She got into the MMA as a ring girl (Cesar Gracie) and started making connections and building her name. From there, she moved on to Playboy and ultimately started her own business.

“I hit Instagram at a good time,” she recalled. “So, I focused on building a fan base and giving my fans what they wanted. I tested posts out to see which ones received the best engagement. I also paid close attention to other influencers to see what they were doing that was making them successful. It’s all about wanting to improve and doing the work it takes to get there. A lot of people won’t or can’t do that. You don’t get to go home after a nine-to-five, this is 24 hours a day, every day.”

Laci went on to point out that besides working around the clock, you have to be willing to do everything. She’s a model, and her manager shoots the raw video footage of her, but she is the one who edits the final product.

“You have to know and be able to do everything if you want to be taken seriously,” she advised. “You have to understand how it all works. When something changes, you have to be ready to change. There’s an algorithm for success.”

A big part of Laci’s algorithm is her just being herself. She’s into fitness and sports — a diehard 49ers, Giants, and Warriors fan — she loves Iron Man and Deadpool, and she grew up playing video games with her dad.

“I’m on PS4. I’ve pretty much always been on PlayStation. I play GTA, Overwatch, and Madden. I also just recently got an Xbox. It’s a little bit harder for me to play, but everyone was like, ‘I have an Xbox. Play with me on Xbox.’ I don’t ever want to leave anyone out, so I got one of those and I am working on getting better at the controls.”

Additionally, Laci is a musician. Actually, she was an artist before she ever even considered being an influencer.

“I opened up for Snoop Dogg and Ice Cube. Then, my social media started taking off and I had to take that more seriously, so the music got put on hold for a little bit. In April, I posted a video of me doing a cover of Gnarls Barkley’s ‘Crazy’ so I could introduce myself as a singer. This way, when I release my original album, it’s not going to feel like something that’s just coming out of the woodwork.”

Some of the other things that make Laci Laci include: “I’m scared of the dark, I love guys with tattoos and a sense of humor, I’m very competitive, and I love to cuddle.”

After learning so much about this incredible young woman who inspires so many people to be their best, for a final question, Entertaining Options asked, “Who is your role model?”

“I think I was born in the wrong era — even though we’re in a really good era right now — because I’d have to say Marilyn Monroe. She was always herself. She was silly and sexy and funny, but she wasn’t a size 0. She was a normal size and she would just do her thing. She dyed her hair blonde to create the image that she wanted. That’s how I am because I’m dirty blonde and I bleached my hair. I have always matched my outside with what I feel on my inside. So I look up to her not only for her movie roles, it’s more about her just always being herself. Real recognizes real: You can’t fake a personality, you can’t fake having a good heart, and you can’t fake genuine.”