Ricky Cooper is an ex-professional baseball player and he’s just turned 40 years old. It’s time to get serious about life! Maybe even change his name to Rick? But the four women in his life — three daughters and a mother-in-law — are pushing him to move faster than he wants to.

“It’s a very approachable show,” Barry Watson (Ricky), star of UP’s brand new original scripted series Date My Dad (Fridays at 9 p.m. ET), told Entertaining Options. “It’s got a little bit of everything. It’s hard to find material that can be sweet and touching, but it also makes you laugh as well. You want to go on a ride with these folks.”

UP has a knack for finding the genuine heart in a series and then offering it to viewers in a truly wonderful way. The Coopers are an extraordinary family comprised of delightful individuals who each have their own distinctive personality. There’s Ricky’s mother-in-law, Rosa (Raquel Welch), whose YOLO take on life makes her a spirited Latina fireball; Mirabel (Zenia Marshall), a fashionable and charismatic teen who is destined to become Insta-famous; Elisa (Lilah Fitzgerald), the rock of the family who in many ways has taken on the role (and responsibilities) of her deceased mother; and the adorably progressive and precocious 8-year-old wiz-kid, Gigi (Audrey Smallman), who is the brains of the bunch.

“I think having this particular ensemble has a lot to do with making the show such a great ride,” Barry commented. “You get these great scripts, but if casting doesn’t work out, then whatever was written on the page doesn’t really matter anymore. During that casting process when we were reading all the girls, it was so obvious when each girl came into the room that they were the one… Even before they said any of their lines!”

“For instance, when Audrey came in to her audition, she was wearing a blazer and she had these new glasses on and she was like, ‘Hi guys, these are my new transition glasses.’ I just started laughing, ‘She’s Gigi!’ Audrey came in and she just nailed it. All of our jaws were on the floor after she walked out of the room.”

Audrey detailed what the experience was like from her perspective. “The audition process was a bit nerve-racking because I really wanted the part of ‘Gigi.’ I went into the second audition and literally that same day I was called back for a chemistry read through. I was nervous and full of butterflies. I had a very strong connection to Gigi right away. Gigi wears glasses, she is quirky, has two siblings, and is smart. These characteristics are exactly like me! Except Gigi MIGHT be smarter than me… (in the literature department). When I met Barry, he made me feel really welcome and enthusiastic about the part and working with him. He just has a genuine welcoming, open, personality, which helped calm my nerves.”

“When I first read the script, the Rosa character really popped off the page for me,” Barry noted. “I love this character and what’s great about Raquel is she can really make Rosa pop off the screen like she pops off the page. We were really lucky to have her want to be a part of it. Plus, she’s got great comedic chops!”

But how did Barry, himself, first get involved? He’s a veteran actor who has had a phenomenal amount of success in shows such as 7th Heaven, Samantha Who?, Gossip Girl, and Hart of Dixie. What was it that made this the perfect series for him at this stage in his life/career?

“I’d been a single father for a few years and there was a time when I was getting a bunch of single father concepts for shows, but they weren’t written right. None of them seemed genuine,” he replied. “They were all written with a bumbling idiot father or maybe he was too perfect, but there was nothing really messy. What I liked about this script was that it was messy in that real sort of family way, and not everybody is perfect. Ricky does not always do something perfect to save the day, he makes mistakes. But he’s trying to do the best he can, as most parents do.”

In a funny anecdote, Barry revealed that he initially passed on the script. “Barbara Fisher, who is the Senior Vice President of Original Programming at UP, and her husband, Michael, and I worked together on a Hallmark movie years ago and we became friends. One night, I was having dinner with them and she sort of pitched the idea for Date My Dad to me. I hate to say this, but for whatever reason, that night she pitched it terribly.”

“I pitched it again at a Dodgers game,” Barbara added. “But it wasn’t until Barry read the actual script that he got really excited — he said the script was much better than my pitch!!”

“When I read the script, I had tears in my eyes, but I was also laughing at the same time,” Barry recalled. “I realized… I AM Ricky Cooper!”

“I think every actor kind of throws in a bit of who they are into any character they play, otherwise it would be hard for them to find the character — you have to find something within yourself to go play somebody else. I was a single father to my two boys until I met my wife, so I know a little bit about that messiness of just trying to do the best you can. It’s interesting, but I don’t know if I could’ve played Ricky Cooper with the same depth without having my daughter. The father and daughter relationship is so much different than the father and son relationship. Ricky Cooper was always in my wheelhouse, but because of my daughter, I’ve been able to take him to a level that I couldn’t have without her.”

Barry reflected on the realness of his reactions to what the girls put him through in the series. In episode one, for example, Mirabel, Elisa, and Gigi open a dating service, which is cleverly disguised as a lemonade stand, in order to help get their dad moving forward in life.

“I could imagine in real life having my kids trying to set me up on dates. It would be humiliating! I would feel humiliated and embarrassed by the whole thing. So I think Ricky’s anger in that episode stems from, ‘How could you do this to me? I’m a grown man!’ But on another level, I’m also mad at myself, ‘How come I’ve been living this way of life for this many years? Why can’t I move on?’ Ricky’s embarrassed, but he knows his girls are right. It’s time to start dating again.”

It’s important to point out that although the show is called Date My Dad, it’s not going to feature a new date in every episode. “Sure, you’re going to see Ricky go on some fun adventurous dates and there’s going to be a lot of comedy that comes from that,” he acknowledged, “but a lot of the series is about him dealing with the kids and family life. As we progress, you’re going to see more stories about what the kids are going through in school and their life. So, for the families that watch the show together, the young kids will hopefully be able to attach themselves to one of the characters as well.” 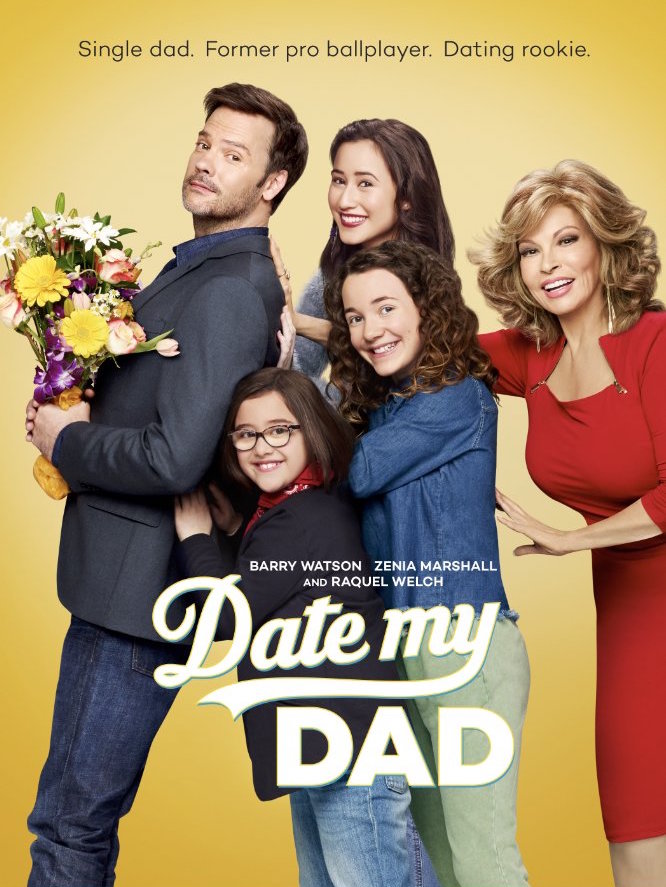 “Usually, the families we see on TV are so extreme,” Barry continued. “There’s the extreme comedy family or the extreme dramatic family. Date My Dad is a little more in between. In real life, comedy comes from drama and I think Nina Colman did such a great job putting it altogether and really getting what family is all about. We’re really lucky to have someone like her who has put together this show in a way that hasn’t been done in a long time. Timing-wise, I think this is something really needed in society, too.”

Final question: “Is it Rick or Ricky?”

Barry laughed. “I think of him more as Ricky. He wants everybody to think of him as Rick, now, but deep down he’s Ricky. He might try to be Rick in a future episode on a date, but really, he’s just Ricky, ex-pro baseball player.”

UP’s Date My Dad (Fridays at 9 p.m. ET) is emotionally-charged, uplifting television magic. It’s genuine and messy in all the right ways. After just one episode, these endearing characters will become your favorite TV family.