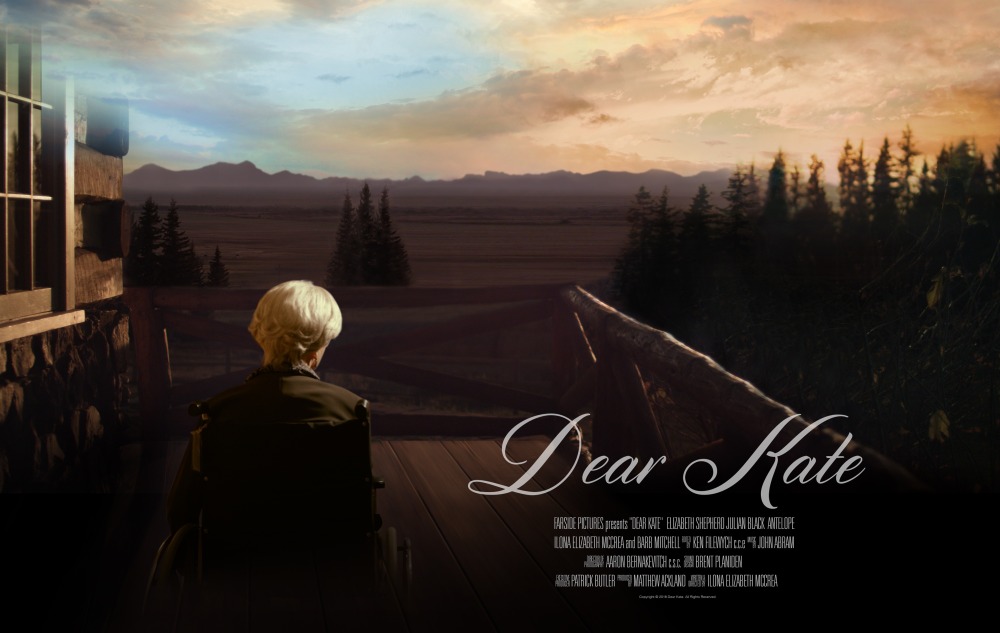 “I am sitting in New York, looking out over the Hudson River.” Elizabeth Shepherd began. Her voice was exquisite, dipped in the elegance of a bygone era. Art and culture flowed from her lips as she spoke with an effortless cosmopolitan cadence and tone.

The veteran actor was born in London in 1936 and is still enjoying a rich life filled with accolades and artistry. Early in her career, she portrayed Emma Peel in the ’60’s television show “The Avengers.” In that same decade, Elizabeth starred opposite Vincent Price in Roger Corman’s highly acclaimed “The Tomb of Ligeia” where she was recognized as a superb actress who could keep Vincent on his toes. Her latest work is a short film by actor/writer/director Ilona Elizabeth McCrea entitled “Dear Kate” (Farside Pictures). “Dear Kate” will premiere at the Newport Beach Film Festival on Wednesday, April 26.

Currently, Elizabeth resides in Washington Heights, the highest elevation on New York’s Manhattan island. Today it offers a glorious view of the region, but, interestingly enough, in the 1770s, General George Washington established Fort Washington in that locale so he could monitor the advancing British soldiers.

New York holds a special significance in Elizabeth’s heart because it was the first place she emigrated to, her first connection to North America. Additionally, it is where her son lives.

“I am a missionary’s daughter,” she declared, “so you go where the work is. I actually have three passports. I am a citizen of Britain, America, and Canada. I’ve worked a lot in Canada and that’s one very good reason why they approached me for this movie — we filmed it in Calgary.”

“When I first went to Canada in the ’70s, CBC [Canadian Broadcasting Corporation] did wonderful drama,” Elizabeth recalled. “I worked several seasons at Stratford where I played Cordelia [‘King Lear’], Gertrude [‘Hamlet’], and Queen Katherine [‘Henry VIII’]. I worked at the Shaw Festival and regional theaters all over Calgary, Edmonton, Montreal, and Winnipeg. I also made a few films there such as ‘Double Negative’ and ‘The Kidnapping of the President.’ The last thing I did for the CBC was a series called ‘Side Effects.’ I played a nurse who was running a walk-in clinic.”

“Dear Kate,” the film premiering at the Newport Beach Film Festival tomorrow, is a powerful work that explores longing for connections as we progress in life.

“I am in a senior residence and I am writing to my daughter,” Elizabeth explained. “My name is Lorna and Kate is my daughter. I think that one reason why Ilona McCrea conceived of the story is sympathy for the many older people who live in residence homes and are neglected. There is a kind of loneliness from being cut off from everything that was vital in her life. Lorna was a singer. She had a very good marriage with Kate’s father, but he is suffering from Alzheimer’s disease in the same residence.”

“Lorna is a vital woman, quite feisty. But in this letter, she is really trying to connect with her daughter. She is talking to her about her own life and trying to maintain this intimate family relationship. She is also longing to see her granddaughter.”

Much of the story is told through flashbacks. We get to watch Lorna’s childhood, meet her parents, and follow her career as a singer.

“We see Lorna meeting Kate’s father. We also see Kate packing up the family home and leaving it for sale, going off with her daughter, Lorna’s granddaughter, so one gets this feeling that the visit that she is so anticipating and hoping will happen soon is likely not going to happen — as happened last time. What is so touching is that Lorna is not filled with recriminations, just a longing for that connection.”

Elizabeth lives a happy life at home and she enjoys a very close relationship with her son, so fortunately, she hasn’t personally experienced Lorna’s situation.

“I do have elderly friends and relatives, though, and I have observed this in nursing homes and retirement homes. I think that in other cultures, the way in which the older generation is revered and taken care of, it really shames us. Here, the elderly are just sort of pushed away. Out of sight, out of mind. This is very sad.”

“In our film, we are showing an example of how somebody should be treated,” Elizabeth noted. “Lorna is obviously in a position to be in quite a nice residence, a sort of assisted-living rather than just a nursing home. It’s all right if you can afford it, but they are so expensive! It’s only for the people who have the money. In this movie, Lorna is quite fortunate that she has a nice setting where she is able to re-create the atmosphere of her own home. The set decoration was done with great care producing all sorts of personal photographs from my own life to make it really look as if it was Lorna’s life.”

When asked about her secret for staying so vibrant and active at 80, Elizabeth replied, “I think it’s partly good genes, but also, I just keep working. It’s about keeping alive and keeping interested in life, taking up new things and being involved in the world. It’s about keeping one’s energy moving forward. I am still very active in life and I am very fortunate that I am able to be.”

“Elizabeth is nothing short of captivating,” Ilona Elizabeth McCrea told Entertaining Options. Besides writing and directing “Dear Kate,” she plays young Lorna. “From the moment she appeared on set, at the retirement facility, there were a number of men vying to find out who the ‘beautiful new broad in Room 245’ was. Elizabeth brought this, and much more, to her indelible performance in the film. Her kindness, her compassion, her collaborative spirit and her curiosity truly struck and inspired me. It was both an honor to learn from her, and a pleasure to work with her.”

In closing, Elizabeth expressed, “What I would like most is that for anybody seeing this movie, when it finishes, they would immediately call their mother!”