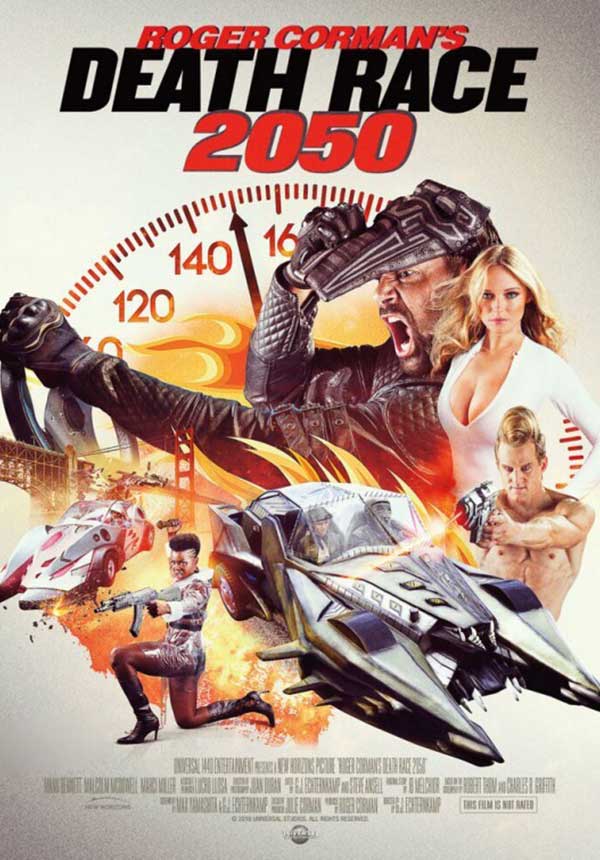 Folake is one of the stars in Roger Corman’s latest film, “Death Race 2050,” available today (January 17) on DVD and Blu-ray. She plays Minerva Jefferson an elite competitor in the “single greatest sporting event known to man,” the Death Race.

For those unfamiliar, Corman is a legend. He’s a Paragon of the Preposterous, the Lord of the Low-Budget, the King of Cult Movies. Actively creating since 1954, the films he’s been involved with include “The Fast and the Furious” (1955), “Attack of the Crab Monsters,” “It Conquered the World,” “Night of the Blood Beast,” “The Wasp Woman,” “X the Man with the X-Ray Eyes,” “Piranha,” “Sharktopus,” “Dinocroc,” and countless others. At 90 years old, the master is still producing outrageously entertaining cinematic fare.

“It was a lot of fun to shoot, “Folake expressed. “It’s crazy gory and it has a lot of innuendos. The folks who are familiar with the original are going to love this!”

Folake, was born in Lagos, Nigeria. The youngest of 19, the athletic artist excels in infusing each character she plays with an intriguing depth and vibrancy. Her remarkable range has allowed her to land leading roles in everything from intense emotional dramas to over-the-top action movies.

“My background is in theater, so drama and comedy both come naturally to me. But I am a huge fan of post-apocalyptic action flicks, shows along the lines of ‘Death Race’ and ‘Mad Max.’ I love those kinds of movies and I could do that genre for the rest of my life. Science-fiction, fantasy, adventure… I’m also a huge X-Men fan and I like ‘The Walking Dead.’ If I had to pick between two projects that were identical in every aspect except the genres, I would probably lean toward sci-fi/fantasy/adventure.”

“In December 2015, my manager, at the time, pitched me for the role in ‘Death Race.’ I went in for the audition and I was asked to come back to meet Mr. Corman. Growing up in Nigeria, I wasn’t very familiar with Mr. Corman’s work because it wasn’t content that we received a lot of. I did a great deal of research on all of his work and learned about his influence on the industry. After that, it was a no-brainer that I was going to accept the part. It was just about this time last year when I booked the role and started preparing to go to Peru to film.”

Besides being an actor, Folake is also an accomplished musician and an audio engineer. As an afro-electro-rock recording artist, she goes by the name “The.Folake!” Her self-titled single debuted at number one on CD Baby’s Afro Pop charts. Additionally, she contributed music for “Death Race 2050” and another film she appears in called “Female Fight Club.” Folake was also the blonde bass player tearing up the stage with David Bowie in his music video for “The Next Day.”

“Acting is my 9-to-5 — only it’s more like 9-to-9,” she laughed. “That’s what I studied in school — I also studied audio engineering, but my BA was in theater. I love music very much, that’s the closest to my heart, actually. Initially, I wanted to be a musician. But things turned out exactly right at the end of the day because if I had to approach music the way I approach acting, it would take some of the joy and creativity out of it.”

After “Death Race 2050” (available everywhere today on DVD and Blu-Ray), you can catch Folake’s comedic cameo in the upcoming action-thriller, “If,” starring William Fichtner and Columbus Short. She is also working on an innovative video game project that is so groundbreaking, she’s bound by contract not to divulge any details… at all! And, if that wasn’t enough to keep this multi-talented star busy, Folake has her own production company, Fo.Foyeh.Films. “We recently release the first season of our web series called ‘Inappropriate Sh*t!’ It’s a series of short skits about doing and saying inappropriate sh*t.” [Watch Episode 2: “Jackson The Dog” below.]