Kate is a college girl who is just trying to do her best at a new summer job. Smart, assertive, proactive, and resourceful, she is fully equipped to take ownership of any situation or challenge she is faced with. But is that enough when someone decides that her nanny services will no longer be needed… Ever again?!

This Sunday, April 29, Lifetime is indulging you with an entire day of totally twisted nanny tales. At 8/7c, it’s the premiere of the white-knuckle thrill ride called Nanny Killer, which features a thoroughly gripping performance by the film’s star, Morgan Obenreder, who plays Kate.

Besides shows like Bones, NCIS: Naval Criminal Investigation Service, Mascots, and The Young and the Restless, you might remember Morgan from Lifetime’s Double Mommy, the infuriating story of a privileged family covering up their son’s multiple accounts of date rape. 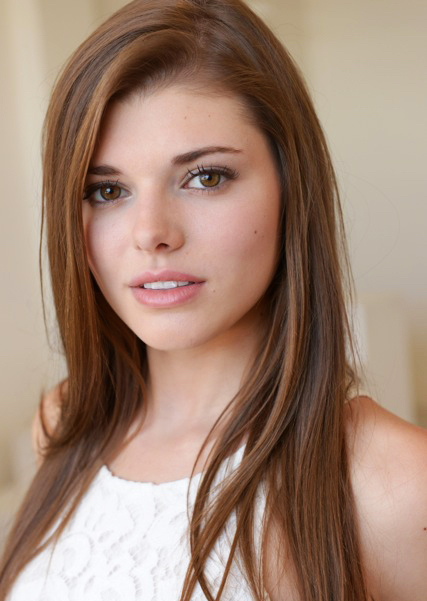 “It’s fascinating what people are interested in,” Morgan commented. “That was one of Lifetime’s highest rated movies. People really tuned in to that one. And it’s still airing. I think it’s because it has an element that concerns a lot of younger girls and it’s a high school drama. Teenage girls run the world.”

Although teenage girls obviously do run the world, a great deal of that film’s appeal was due to Morgan’s compelling work. Obenreder is remarkably good at what she does. She infuses her characters with a sense of purpose and adds a depth that draws viewers in, making them really care about what happens next.

Interestingly, as talented an actress as Morgan is, she started off her life about as far from Hollywood as you could possibly get while still living in the U.S. Obenreder was born in Yardley, a quaint little riverside town located in Southeastern Pennsylvania. After just two years, her family relocated, moving about three-quarters of the way across her home state, to DuBois.

“DuBois has about 7,000 people,” she informed. “No matter where you go, you run into someone you know.”

At age 7, Morgan began acting at the local Reitz community theater. The acting bug bit hard and by high school, she was traveling across the country to attend acting classes in LA.

“Basically, acting was my favorite hobby. It wasn’t something real, something I could pursue as a career. But when I was a sophomore in high school, my school put on the production of My Fair Lady and I was cast as Eliza Doolittle. That was the first time I really dived into a role. It took over my life — I have no idea how I passed any tests at that time! I was obsessed. The response I got from that production was what convinced me, as well as my parents, to go to that acting camp.”

Morgan met an agent at that camp and that’s when she decided she needed to move to California.

“My parents were great! They were like, ‘If you want to do this, what are our options?’ Then, it was almost like the stars aligned. I have an uncle who lived in Colorado and worked for Lockheed Martin. He was offered early retirement in that exact same month that I was deciding to move. Because my parents had stable jobs, there was no way they could move, so they asked my uncle, if he would move to LA with me to help me get started.”

“Without hesitation, he moved out here with me and we started our life together. He kind of took over the parent role. It was just incredible that it worked out like that. Now, he has his own place here and he has started his own tutoring company. Moving out here started a whole new life for him too. It was just such a fluke that it all worked out.”

Admittedly, Nanny Killer has a clickbait name that at once has you insanely curious but also a little hesitant to watch. But rest assured, it’s a quality thriller that keeps you engaged and concerned for the safety of the heroine. Plus, there might be a jump scare or two!

“I am the biggest scaredy-cat!” Morgan confessed. “We went to see A Quiet Place last night. I have friends who were telling me it wasn’t that bad, but I can only handle so much because that’s the sort of stuff that my brain believes the most when I’m imagining. Plus, I hate jump scares! Today, my body is aching because I jumped so many times while watching that movie.”

Nanny Killer is an important film for Morgan because it marks a change in her career.

“It’s the first time that I am playing somebody who is older than high school,” she noted. “It’s a step into something just a little bit older for me. I have a role of responsibility. I’m taking care of these two kids [Jack, played by Tucker Meek, and Rose, played by Violet Hicks]. I’m not the kid anymore.”

“Also,” she added, “I’ve tended to be a victim in a lot of the films and TV shows that I’ve done. But this time, I get to work to solve what’s happening in the story. I’m not a victim of the circumstances, I’m the one who is trying to save someone.”

“I hope that people enjoy this movie,” Morgan concluded. “There’s a lot of exploring the concept of good and bad. The people who are bad… are they behaving that way because they hate someone or because they love someone? It’s complex in that way. But it’s also just a fun ride to see how this series of events unfolds. We filmed it in this beautiful mansion that seems otherworldly, so the whole movie has this old-timey elevated sense of spook to it!”

Nanny Killer is a taut thriller that is heightened by a foreboding darkness and draws parallels to films like The Omen and The Good Son.